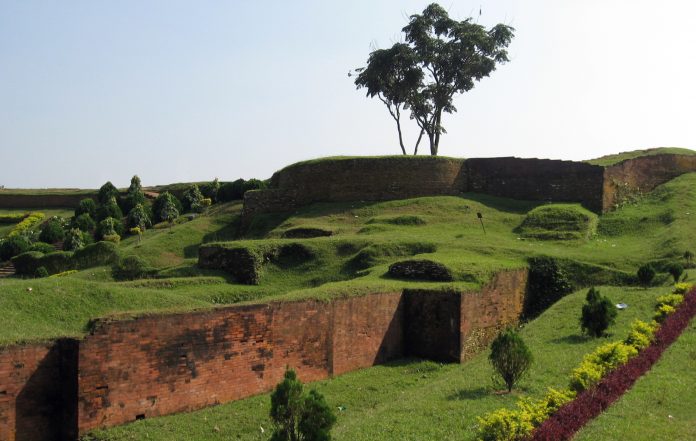 Mahastangarh is located at the Bogura district, Shivganj upazila and near to Rangpur highway, beside the Korotoya River. It is 13 km far from the Bogura main city. Here available motorcycle, Car, buses and other vehicles.

It has a vast history. The archeologists decided that this works is older than 2500 years. Archaeological evidence suggests that civilized settlements were formed here about two and a half thousand years before the birth of Jesus Christ. At that moment it was a civilized city. They are too much surprised to see the works of that moment people. Inside the walled city are archeological monuments of different periods. For several centuries it was the provincial capital of the Maurya, Gupta, Pala and Sen dynasties and later the capital of the Hindu feudal lords. Numerous Hindu kings and kings of other religions ruled from the third century BC to the fifteenth century. The previous name of this city was Pundrabardha or Pundra nagar. In that moment it was a teaching centre of Buddhist religion. Many students or people come from the China and Tibet and after learning, they go to North South Asia to teach the people about Buddhist religion.

More than one person has contributed in identifying and uncovering the ruins of Mahasthangarh. In 1808, Francis Buchanan Hamilton first identified the location of Mahasthangarh. In 1879, the British archaeologist Alexander Cunningham first identified this ancient historical city as the capital of Pundravardhana. Many tourists and scholars, especially c. J. O’Donnell, E. V. Westmacott and Henry Beveridge visited this suburban area and mentioned it in their report. Archaeological excavations in 1931 uncovered the Brahmi script. In that inscription, the provincial ruler of Pundranagara, Emperor Ashoka, instructed the famine-stricken people to provide food grains and financial assistance from the treasury. These data match the oldest evidence of this famous city. According to another legend Hazrat Shah Sultan Mahmud Balkhi (R 🙂 and his disciples came to establish Islam. There are wonderful legends about the preacher Shah Sultan Balkhi. It is said that when he entered Mahasthangarh, the ancient Pundranagar, he crossed the Karatoya river on the back of a huge fish-shaped boat. Arriving at Mahasthangarh, he continued to preach Islam. At first, Raja Parshuram’s army chief, ministers and some common people accepted the message of Islam and became Muslims. Hazrat Shah Sultan Mahmud Balki(R:) defeat Porshuram. He was the prince of a region but due to serve Islam, he left his chair and endow in Islam. Then he came in Bengal to learn them about Islam.

There is also a mosque built later (1818-19). At present a few mounds and construction patterns can be seen inside the fort. These include the Ziyat Kunda (a well believed to have the power to give life), the Manakali step (the sacred place of Manakali), the Parashuram residence (King Parashuram’s palace), the Vairagir Vita (the nun’s stable), the Khodar Pathar Vita (a stone dedicated to God), Munir Ghon (a chloe) etc. are notable. There are several entrances in different places like Kanta Duaar (north), Dorab Shah Toran (east), Buri Gate (south), Tamra Darja (west). In the north-east corner there are several steps (later attached) that lead to the wharf. Govinda Vita (Temple of Govinda) is located on the banks of the river Karatoya, just in front of the wharf. In addition to the fort structure, there is a mound about 9 km are spread over a wide area of radius.

Many archeologists have been excavated many times. They found new information, they found one of the antique Brahmi Lipi. Which was very old and very antique type. Totally this area was excavated 7 times. According to archeologist No coherent construction plan can be noticed in the open temple-installation in the shrine area. It appears to have been built and rebuilt in five stages during the Pala rule. Archaeological finds from the area include several large terracotta plaques, toys and spheres, and ornate brick and earthenware.

Here have many visiting spots. You can see the beautiful nature and the archeological works. Here has castles, which are different one to another.

The museum was established in 1986, just 8 km north of Bogra and just opposite Govinda Vitar, a little north of Mahasthangarh. Initially, the main part of the museum was on 3 acres of land, but it has expanded at various times and now stands at about 10 acres. Mahasthan Garh excavations have resulted in numerous thousand year old relics of Maurya, Gupta, Pala, Sen and other dynasties made of gold, silver, iron, bronze, stone, bronze, various precious metals, terracotta statues, black stone statues, sandstone statues, earthenware Carved bricks, gold objects, various inscriptions, sharp weapons for self-defense, essential utensils and various types of antique ornaments have been found which are preserved in the museum north of Mahasthangarh. Apart from Mahasthan Garh, archeological specimens of various other places are preserved here.

More common places are Mazar Sharif, Khodar Pathar Vita, Mankali Mound, Bairagir Vita, Mangalkot Stupa, Skandher Dhap, Tangra Buddhist Stupa, Vasu Bihar, Bhimer Jungle, Jiyat Kund, Behular Basar Ghar, Parashuram Palace, Govinda Vita. According to locals here have a well, in a time if anybody die and if a drink that person water from the well that person alive. Another history in Bangla literature or folk tales, Behular Basar Ghar is very famous to Bengli people. You can also visit this spot to see the history own eye.

Don’t miss to taste yogurt. The yogurt of Bogura is famous all over the country.

All the details of the trip to Saint Martin tour